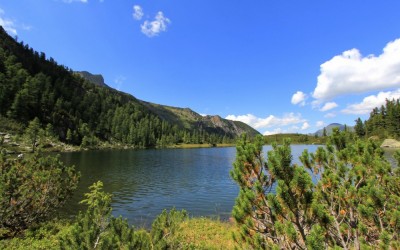 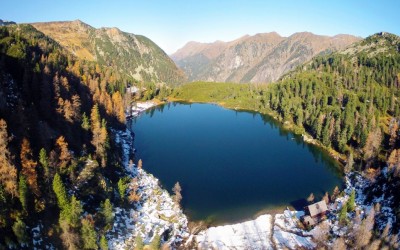 Surrounded by ancient Bergwald the Reedsee (1831m) is located in a picturesque glade at the foot of Tischler group. With a bit of luck, trees, mountains and glaciers reflect magically in the calm waters. Those who hike up here should bring enough time and snacks to have a well earned break.
The hike starts quite comfortably on the nearly flat ground of the Prossau forest road, underneath the impressive sky and surrounded by the glaciated peaks of the Tischler group. After about half an hour we turn right to a small bridge over the Kötschacher Ache, which we reach with the beautiful path. After a few minutes it's over with the cozy walking. An hour it now goes uphill, partly through forest, but often on windthrow areas, to the Kohlplatzl, a small clearing where once the charburner worked. By pines and gnarled wood we walk after this brief respite on uphill until the path suddenly becomes flatter and the Reedsee is suddenly and magically ago. From Kohlplatzl you should not leave the trail by the way, as some deep, often hidden under scrub crevices traverse the terrain. On the ascent later goes back to the starting point.

Video: Hike to the Reedsee